In which Minimus Gluteus imitates his legendary uncle, Maximus with another misadventure in the East

This is a very small Tactica game I played solo in December while recuperating from a mild heart attack I suffered late November while trying to put up some Xmas decorations at the insistence of my spouse. Not being allowed to do much, I was looking for some way to entertain myself and decided, "Why not play some Tactica"! It was done entirely at my computer using Battle Chronicler to do the moves using the Tactica II playtest rules. If you haven't heard of Battle Chronicler, you can check it out here: http://battlechronicler.com/    Although a little cumbersome, its a decent program that enables one to make maps of the miniature battles. I apologize for the mountains that look like cow paddies, but that's what Battle Chronicler has to work with.  At any rate, I had fun doing it and it allowed Minimus to continue his journey to Germania while Pontic General Mitchradates continued battling the Romans in Cappadocia.  All characters appearing in this work are fictitious. Any resemblance to real persons, living or dead or real events, is purely coincidental.

Book I: Battle of the Syrian Gates

Minimus Gluteus, Roman General had been defeated at the Battle of the Narrow Plain on the Pontic coast road between the town of Amisus and the Halys river. Trying to flee back to Roman territory, Minimus was apprehended by  a special armed guard from the Roman Senate at the Grecian Port of Nicopolis and sent north to fight naked barbarians somewhere in the wilds of Germania.
The Roman Senate raised new Legions and sent them East, hoping to finally bring the citizens of Pontus under Roman rule. Although if the truth be told, it was more the idea of large numbers of population not paying taxes to Rome that irked them than bringing Roman civilization to the world. The Roman General decided on a bold plan to attack Pontus from the South, up through Syria and into Cappadocia. Roman colonies in the near East would provide a convenient base to support his campaign.

He advanced on several fronts hoping to out-flank the Ponts and their numerous allies. Most of the routes were in open terrain and the armies of Pontus with abundant cavalry were able to dispute any Roman advance. One route however, was through a mountainous region of Syria over the Belen Pass, also known as the Syrian Gates. Due to its narrowness, it could be defended by a small force. The Roman General decided to send a single Legion without support troops to take the pass. He hoped quick and decisive action by the Legion would overcome whatever token force the Ponts had to defend it. He thought that the Ponts would surely only defend the pass with light and maneuverable infantry that would be no match for his tough cohorts.

The Empire of Pontus had many troops but not enough generals. All leaders of adequate ability had been briefed and sent to defend the many avenues of possible Roman advance. Thinking the Romans not likely to use the Belen Pass because of its narrowness, the Ponts called on retired General Mitchradates who was on a vacation trip in Cilicia with his wife at the time. Mitchradates had previously been defeated by Minimus Gluteus at the battle of Dragonium, but had delayed Minimus sufficiently that the Ponts were able to raise enough troops in time to defeat Minimus at the Battle of the Narrow Plain. Tired of being harangued by his wife for not attending to chores around the household, Mitchradates readily accepted the command and set off to defend the pass. The only troops the Ponts had available were two infantry phalanxes and some Armenian archers. Not the best for difficult terrain, but the actual pass was fairly level clear terrain. So Mitchradates deployed his troops while the Roman Legion advanced up the pass hoping to find it lightly defended.

Mitchradates pondered how to best deploy his phalanxes. They were not very maneuverable and were very easily flanked in open terrain. Side by side they would completely block the Romans from advancing and in the narrow part of the Pass they could not be flanked. They could not support each other though and could easily be worn down if the Romans chose to attack only one and leave the other un-engaged. So Mitchradates decided to angle the phalanxes so that they could wheel slightly and advance to support the other if the Romans attacked on one side only.

The Roman Legate was surprised to see heavy infantry occupying the pass when he arrived, but it didn’t delay his attack. His Legion had fought whole armies with pike phalanxes before and won, so why should just two units of heavy infantry intimidate him. He decided to engage the phalanxes with as many units as possible and to maximize his Pila attacks. This meant deploying the cohorts individually so that they all had opportunity to throw their pila. In the narrow pass, the only way to get as many cohorts as possible to engage the phalanxes was to deploy the flank cohorts in line and the center cohorts in column. This would result in each phalanx having to fight two cohorts.
So the Roman cohorts advanced and were soon under missile fire by the Pontic archers, Mitchradates had sent in front of his phalanxes. They would get a couple of volleys off before evading behind their heavy infantry.

The Roman Legion advanced toward the Pontic Phalanxes, the leading Cohorts each taking minimal casualties from the Archers. The inside two cohorts advanced slightly ahead of the outer two in order to all hit the Pontic line at the same time. The Pontic archers evaded behind the heavy Infantry, their part in the battle concluded.
Mitchradates, seeing an opportunity in the Roman deployment, advanced his Phalanxes slightly to engage the outer Cohorts before the inner cohorts made contact. This enabled the Ponts to force Cohorts 1 and 4 to each exchange blows with a full Phalanx. The resulting melee was deadly with both sides taking equal casualties. Unfortunately for the Romans the deeper Phalanxes were able to withstand more punishment. Cohort 4 was totally shattered. Some Pontic phalangites after the battle commented it was as if in their eagerness to attack, they literally hurled themselves at the Ponts only to be impaled upon the eighteen foot sarissas of the Phalanx. The larger size of the Elite 1st Cohort enabled to stay in the fight, but they had lost almost half the number in this first round of fighting.

Cohort 5 moved up to take the place the misfortunate 4th as did Cohorts 2 and 3. These did not fair any better and soon Cohorts 2, 3 and 5 were all routed to be replaced by Cohorts 7, 8 and 9. Eventually the 1st Cohort was worn down and when it broke, the Romans decided to call it a day. They retreated down the hill leaving the Ponts in control of the Syrian Gates.

The Pontic Phalanxes had suffered heavy casualties but were never in danger of breaking. The depth of the phalanxes had proved to more than a match for the well trained Roman legionnaires and their Pila. As he directed the disposition of the dead and care of the wounded, Mitchradates thought about the cost of the battle. The armies of Rome were many and they would come again in an attempt to subdue the Pontic Empire.  But at least on this day and at this place he thought, they would not do it through him. He smiled as he considered that fighting Romans was far more enjoyable than being harangued by his wife. She damned near gave him a heart attack about doing chores around his estates this past season. He decided to send her a note that it was likely to be a long campaign.

Turn by Turn
The following is a turn by turn log of the dice rolls and movement. It’s very boring unless one wants to see how the rules for combat are played. They are almost identical to T1. Where a unit fights more than one opponent, it must divide its melee dice evenly against all opponents. Heavy Infantry are awarded two melee dice extra for every rank deeper they are than their enemy. This is for each melee area, not each unit. Therefore you can see how a Phalanx with protected flanks is very difficult to beat. Romans would have been better off sending in "reinforced cohorts" ( i.e two cohorts combined) instead of piecemeal and concentrated on one Phalanx. To win the Romans must get at least 32 kills on one Phalanx to route it. As it happened they put 17 hits on each phalanx, well below their individual break point. Ponts must route enough Cohorts to get a total of 44 kills which they did.

From the Original Series 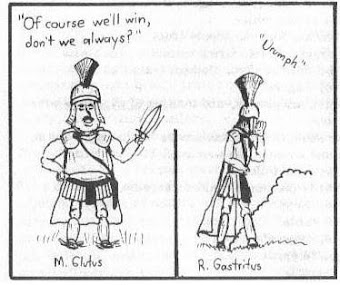 This story is based upon the original adventures of Maximus Gluteus, published in the old, old Courier magazine. Much thanks to Arnold Hendrrick and crew who inspired me so many years ago to venture into Ancient wargaming. I hope I can live up to the legacy established by the original series.

The TACTICA II version of the rules has many improvements over the original. The biggest change is the points system for building armies. No more fixed armies. The system allows players to play games without investing in the large number of figures required in the original TACTICA. The system works very similar to others rules such as Warhammer and Fields of Glory. The morale and missile kill tests are gone, replaced by simple Control Tests for certain situations. Units break now when they reach a fixed level of casualties determined by their quality. The maneuver and deployment turns are gone also, replaced by a fixed deployment and slightly less restrictive movement rules. Set up still remains extremely important as there are penalties for trying to do complex movements. The heart of the original system is retained with the melee resolution. There are still lots of melee dice to be rolled with the outcome of the game often dependent on which way a single melee area goes. 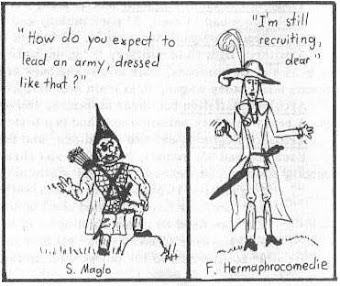 Cast of Characters from the Original Courier Series

Mitch Berdinka
Our group, the West Sound Warriors, is located in Kitsap County Washington. We usually game at Blue Sky Hobbies in Bremerton on 4th Street. Sometimes in Port Orchard at one of the members house or once in awhile at Slaughter Counter Brewery. We have members from Gig Harbor to Bainbridge Island and we almost exclusively play historical games with a few exceptions. Once in a blue moon we delve into futuristic ground combat using the Stargrunt II rules system. We've also had a few Pirate games where skeleton pirates have been seen roaming around, but that's about the extent of the non-historical stuff. Here is a list of most of the periods we game: 15mm Boxer Rebellion, 25mm Colonial, 15mm Napoleonic, 25mm Napoleonic Skirmish, 20 mm Amer Civil War, 25mm Amer Revolution, 15mm Ancients. 1:1250 Pre-Dreadnought Naval. We are always looking for new members. It doesn't matter if you have figures or not. We have a Yahoo Group where you can get notices of gaming events. Go to http://groups.yahoo.com/group/WestSoundWarriors/ and sign up if you are interested

Oh my; my brave legionaires! 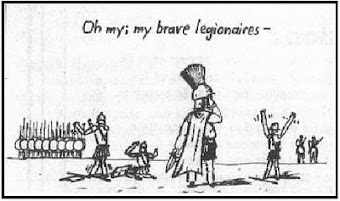 Cartoon from the Original Courier Magazine